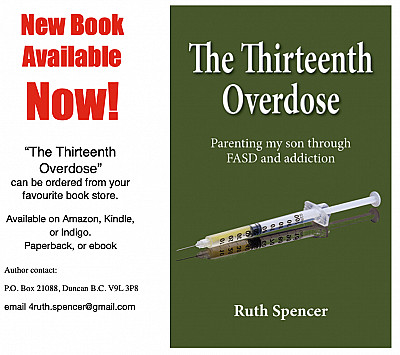 Ruth Spencer has three adopted children with Fetal Alcohol Spectrum Disorder plus fifty years as a parent advocate. She has become an authority on FASD behaviours, even though she describes herself as “just an ordinary mom with no letters after my name.”

In 1994, at the request of other parents in her FASD support group, Ruth started to write about the challenges involved in loving, accepting and supporting her older teenagers with FASD.  There were long hours in Youth Court where “Everybody but me understood the system.”  There were visits to jails: “Once I was locked into the washroom by a guard with a real gun in his belt.”  There were many trips to Emergency, evictions, street living, sexually transmitted diseases, a crisis pregnancy, alcohol and drug abuse, overdose, welfare fraud, psyche ward stays, and suicide.  Ruth never ran short of new material.  By 1997 her articles and poems were being published in Canadian magazines.  “The Thirteenth Overdose” is her second full length book.

Now a proud grandmother of nine (two of whom are genetically linked) Ruth is still parenting her adult children with FASD.

“The Thirteenth Overdose” began its life as a series of frantic emails explaining my new lifestyle to family and safe friends.  I had – it seemed very suddenly – become the mother of a man addicted to heroin.  This should not have been such a huge surprise. Tim had struggled with alcohol and other drug addictions for almost twenty-five years, ever since his seventeenth birthday, and I had supported him through evictions, hospitalizations, and incarcerations.  But heroin was different.  Tim had never been homeless before; he had never overdosed.

Even with his new addiction, plus his now uncertain temper and his life on the streets, Tim remained popular. He had many friends and he was keen to bring them home to meet his mom.  But I was almost seventy and, in my family’s opinion, past the age of enjoying unexpected company, past the age of wanting to provide group dinners almost every evening, past the age of guarding against theft and needing to keep my bedroom door locked and definitely past the age of doing laundry for the street community.

My son needed my help.  I needed my journal to keep track of events previously outside my own personal experience.  And that’s how “The Thirteenth Overdose” came into being.

An Excerpt from the book:

This afternoon the ex-girlfriend told me there was a warrant out for Tim to be arrested. She got quite weepy when I said, “Excellent. If he is locked up he will be getting his heart medication a lot more often and his health will improve.”

On the way home I stopped at the police station and found out there is, indeed, another warrant on the books for Tim.  I told the young man at the desk about his heart failure.

“When he is arrested you need to inform me immediately and I will bring his heart meds to wherever he is.”

The young fellow needed a moment to get hold of this unusual request.

“Why are you so involved?”

“Why hasn’t he got his pills with him?”

“He lives on the streets and loses everything.”

“Will he be able to explain this to the arresting officer?”

When he understood, at last, he put my information in the daybook and said he would notify all units at once.

I’m as bad as the ex-girlfriend, trying to control the lives of others. How many mothers organize their sons’ arrests?

The full book is available on Amazon here

As well as her previous book, “The Burning” here